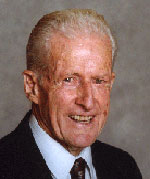 Throughout his life, characteristic possibly of people of his generation, Bill Finan has unobtrusively helped people when others might have overlooked the need. He neither sought recognition nor talked about what the had done. He met people with a smile and a welcoming word. He remembered their names when they might have been anonymous to others. Perhaps that’s what made his visits to hospitals or nursing homes so special.

He chose a professional career of being a teacher. The comment of one of his former students conveys a wider message. “I hated math, but Mr. Finan was always willing to give me the extra help I needed. We all felt he was interested in us.”

After retirement, even during those occasional times when his own health dictated that he slow down, he chose to volunteer at the Deaconess Glover Hospital, doing his assigned job and a little more. On a weekly basis, he helped at the Needham Community Council. He volunteered, and for two years taught inmates at the Norfolk County Correctional Institution.

Few people know of his distinguished military service during World War II. He enlisted in the navy, and became a PT boat commander in the Pacific Theatre of Operations. In recent years he has been an active member of the Needham Veterans of Foreign Wars Post – serving in various capacities, including senior commander, and participating with others in a wide number of community activities.

Like others, the focus of his life has always been his family, but includes what is an amazingly “extended” family. As a result of his deeds, a legend has magically grown, designed by recipients of his love and kindness. Father Francis Garrity, pastor of St. Bartholomew’s Church, in four words, summed up the respect and admiration that exists for Bill Finan: “A wonderful, wonderful man!”

Congratulations Bill, The Richard P. Melick Foundation is pleased to make this presentation.