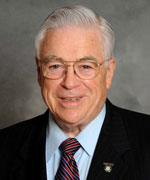 The Melick Foundation is pleased to honor Mr. William Dugan with the 2010 Richard Patton Melick Foundation Award. Bill Dugan was born and raised in Needham. His mother was Kay Dugan who ran Kay’s Antique’s at Chestnut Place and his dad was a detective sergeant in the Needham Police Department. Bill has been married to his wife Sally for forty-three years.

You may know Bill as a longtime Town Meeting Member who began his service in 1990. Bill is also an active member of the Needham Retired Men’s Club and has served as that organization’s president 8 out of the last 10 years.

However, it is his work with the Needham Triad Committee that is his passion. Bill speaks with incredible enthusiasm when describing what the Triad is and what services it provides. As Bill has been the Chairman of Triad since its inception in 1999 he knows the programs very well. The Triad is a community based organization that is a collaboration of Needham Police and Fire Departments as well as the Council on Aging and other interested groups serving seniors. The Triad’s goals are to improve the quality of life of Needham senior citizens and to promote safety and safety awareness for seniors. Bill has worked with the local police, fire, hospital and civic organizations, such as the Exchange Club, to garner support for Triad. The organization is comprised of thirty-five committee members.

One of Triad’s most important and successful programs is the “File of Life” with over 75,000 files distributed to date. This file is a small, red plastic packet which is put on the front of the refrigerator and has a paper insert that makes it easy for medical personnel to quickly identify a senior’s history and medications in an emergency. A number of our local physicians have recently begun distributing these packets to their patients.

Additionally, Triad works with Needham seniors in a program called “Are You OK?” In this program volunteers will call a senior every day to make sure that they are well. This program is available to anyone who needs it, not just seniors.

Bill is quite proud that Triad has trained over 200 seniors in a safe driving program and trained over 350 seniors in CPR. Triad has produced 10 Senior Resource Fairs and 43 informational cable programs addressing various aspects of senior citizen safety. Triad has also worked with the County Sheriff’s office on implementation of “Project Life Saver” in Needham which is a high technology tracking system that can be used to trace the whereabouts of individuals who are likely to become lost.

All in all Bill Dugan has taken a proactive approach to improving both the quality of life and the safety of all Needham seniors. As such he is a very worthy recipient of the 2010 Melick Foundation Award.