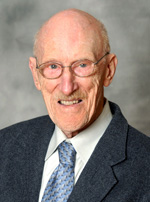 The Richard P. Melick Foundation is pleased to honor William ‘Bill’ Axt. One of the stated missions of the Foundation is “…to recognize people who have made special contributions to benefit others…”  Bill Axt truly exemplifies this.

Bill, with his wife Emily and two daughters, moved to Needham in 1966. Bill was a licensed engineer working for world-renowned companies such as Stone and Webster, Charles T. Main, and United Engineers and Constructors. He recalled that one of his local recognizable projects was the air conditioning of Symphony Hall.

In 1983, at the age of seventy, Bill retired from his field and within a year had started a new career, volunteering at The Glover Hospital. From the beginning, all who came in contact with him were impressed with the smartly dressed gentleman whose quiet manner and gentle smile put one immediately at ease. In 2008, the hospital, now known as Beth Israel Deaconess Hospital, recognized Bill for his remarkable twenty-five years and 8500 hours of volunteer service. It should also be noted that the hospital and volunteer staff helped Bill celebrate his ninety-fifth birthday.

Tonight please join the Melick Foundation in acknowledging the special contributions Mr. William ‘Bill’ Axt has made to our community.