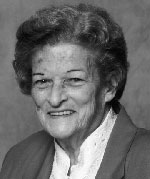 Trudi was born in Needham—a member of the Brady Bunch. She graduated from Needham High School in 1942. During World War I, she married Philip Farnham and graduated from the Newton Wellesley Hospital School of Nursing. She and Phil had two children—Judith and David.

Philip, a veteran of WWI, was recalled into the service of his country during the Korean War and was killed in 1951. Trudi has been a single parent since that time. She raised her two small children, worked, and fol­lowed their education. Today her daughter, Judith Preston, is a Student Affairs Professional at the University of Connecticut and her son, David Farnham, is Principal at the Random Lake Middle School in Wisconsin. There are three grand­daughters carrying on a tradition of volunteering.

Trudi worked at the Glover Memorial Hospital, survived cancer, retired, and went to work at the American Red Cross, retiring again in 1988.

“Volunteer” could be her middle name. As a parent, she was a Brownie Scout and Girl Scout leader, Little League parent for ten years, and was the first woman to serve on the Little League Board of Directors. She founded the “Crib Room” at the Christ Episcopal Church for parents to leave their little ones while they attended church services. She also served on the Altar Guild at the church.

She has served the Town of Needham as a volunteer with the Board of Health at the Flu Clinic for six years and has worked as a poll worker on election days for many years. She is a member of the Human Rights Committee and served as Co-chairperson for two years. She spent 10 years with the Needham Housing Committee and still comes in weekly to help in the office. She is a Director of the Needham Community Council and each week goes with their Traveling Store to local nursing homes with small items for the residents. They call themselves the “Bag Ladies.”

Trudi has been a member of the Council on Aging and has served as its Chairperson. While at the Council on Aging, she helped connect seniors with medical services, provided transportation to hospitals and doctor appointments, did shopping for shut-ins, and even helped some move.

She was a member of the Korean War Memorial Committee which recently erected a monument to honor those Needham resi­dents who gave their lives for their country and our freedom.

At the Needham Senior Center she has put in thousands of hours volunteering as a receptionist and nurse secretary of the Keep Well Clinic photocopying and preparing presentations.

Although not a Town Meeting Member, she attended almost every Town Meeting for years, sitting quietly in the back of the hall until just last fall when failing eyesight forced her to give up driving. To sit quietly at Town Meeting, while not required to be there, is worthy of a special award in itself. I was a member for ten years and there were times when I wanted to scream!

Trudi Farnham has worked quietly and effectively and has made a difference in the lives of hundreds of Needham citizens over the past 50 years. For al of the reasons I’ve mentioned, it is with very great pleasure that the Melick Foundation presents to Trudi Farnham their award for 2002.