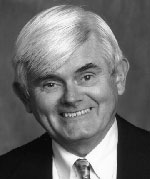 Peter Adams is a quiet but dedicated volunteer who is always quick to be of ser­vice to his fellow citizens, whether it is a walk-a-thon or a town government need. While he is quick to be of service, he is slow to take credit for his accomplishments, preferring to hold back when it comes to recognition. He seems to be in perpetual motion when it comes to helping others and his enthusiasm in volunteering is contagious to those around him.

Peter has lived in Needham for over 25 years, raising his two sons here with his wife, Margie. He graduated from college as a theatre arts and English major and tried his hand at acting for about six years before joining the financial world. In college one of Peter’s jobs was to bring wheel chair students to class. Peter grew up in Wellesley but as an adult realized that Needham would be a good place for his family. He and Margie have two sons, Peter and Matt who both now have children of their own. Peter coached his sons at soccer, basketball and Little League for many years, serving as manager, coach or assistant coach as needed. He went to work for the Bank of Boston in 1966 and ended staying there in various positions for thirty years. While there he volun­teered to help with the United Fund campaign at the bank. Recognizing his commitment and sense of responsibility, the Bank of Boston made him the Chairman of their United Fund campaign.

Much of Peter’s local volunteerism has been as a member of the Needham Exchange Club. Peter joined the Exchange Club in 1987 and has been an active member ever since. He has been the chairman of the Fourth of July Committee for several years. He is a past member and past chairman of the Exchange Club Child Abuse Prevention Center, which raises funds for child abuse prevention programs in the Needham and Newton area. Peter has been a member of the Exchange Club board of directors and was the Club president in 1993 and 1994. In 1999 Peter was honored as the Needham Exchange Club’s “Exchangite” of the year which is an award given to members who have shown dedicated service above and beyond the call of ordinary membership. In 2000 Peter was honored as the New England District Exchangite of the Year. Beginning in 2002 Peter will serve as the president of the New England District Exchange Club.

In addition to his Exchange activities, Peter has volunteered at the Charles River Association for Retarded Citizens. He currently serves on the board of directors at Charles River ARC, which is a six-year commitment and has been active in their fund raising activities for their new building. Peter is a town meeting member and currently serves on the town Finance Committee. This year he is the vice chairman of the FinCom and next year he will serve as the chairman. Peter is a mem­ber of the town Domestic Violence Committee, which is primarily an educational committee to help prevent domestic violence. Peter has been a blood donor for thirty-five years. This involves donating blood four times a year. He is such a regular at this that sometimes he gets a call if the local blood bank is running low.

Peter is not afraid to get involved if someone needs help. He is always participating in a walk-a-thon or a picnic for people in need or some project to help others. His quiet but dedicated service to others sets a great example and he has contributed much to the quality of life in our community. We are proud to present the Melick award to Peter Adams in recognition of his community leadership.