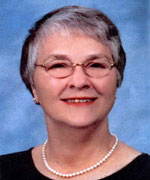 Meredith Plaisted Page was born in Portland, Maine and graduated from Wayneflete Academy and Westbrook Junior College. She and Donald Page were married in 1956 and a decade later made their home in Needham.

Meredith was best known to us as the faithful vote teller at Town Meeting on which she served for over thirty years. Although this duty may have been the most visible of her community service, like the tip of an iceberg, the greatest impact of her volunteer and community service was what was beneath the surface.

Some of her earliest involvement was with the youth sports teams of her sons, Jeff and Dave. Her enthusiasm soon earned her the title of “Mrs. Booster.” Her own children were not the only children in Needham that she cared about. For 50 years she volunteered at the Walker Home and School, serving on the Board of Directors for 41 years. During this time she would take children from Walker into her home so they could participate in Little League and other athletic activities. She also started the annual Walker golf tournament to benefit the school. Meredith was engaged in activities which raised millions for the school.

Another aspect of her volunteer service was her involvement with the American Cancer Society. Meredith started Needham’s first Relay for Life in 2000.This annual event has raised close to two million dollars in its decade of operation. But fundraising was not her only cancer prevention activity; she spoke to community groups concerning the dangers of smoking and sun exposure as well as participating in many cancer screening programs. In 2008 she received the St. George National Award, the highest recognition given by the New England Division of the American Cancer Society.

Cancer prevention awareness was not the only prevention program in which she was involved. For many years she served as chairwoman of the town’s Traffic Management Advisory Committee which recommended and implemented many safety measures, from hedge trimming to traffic light installation.

Even after doing so much for so long Meredith never hesitated to find some new volunteer activity. When the organization Needham Cares was started to help victims of hurricane Katrina, Meredith was there serving on its board of directors as clerk.

It must be remembered that Meredith did all this while raising a family and working as a realtor.

It is with great respect that the Melick Award is presented posthumously to Meredith Page.