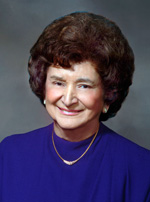 A commitment to giving back to others, a willingness to help out any cause, a dedication to active involvement in making our community a better place in which to live, and doing all without any need or expectation for recognition or reward – this is the person to whom we are most pleased to present the 2009 Richard Patton Melick Award – Louise Condon.

Louise and Frank came to our fair town in 1968 and together they raised seven children here. Forty-one years later, they have 16 grandchildren and Needham is much the better for the journey that they have shared. With a background in teaching and yet caring for seven at home; Louise made her first contributions by serving as a Room Mother at Mitchell for 14 straight years. In addition to serving on numerous Parent Teacher Councils, she was also a Girl Scout leader and Campground Director. Louise took particular attention to ensure that young girls understood the importance of self-confidence, self-respect, and a desire to achieve. For these efforts, the Patriot Trail Council of Girl Scouts declared her an “Outstanding Woman.”

As a long-standing and devoted parishioner of St. Bartholomew Parish, Louise has been at the center of many Church activities, including terms as President of the Women’s Guild.  But no activity at St. Bart’s can be more significant or rewarding than her continuing 39 years as a religious education instructor.

Louise’s professional career has been most noteworthy as one of Needham’s most successful businesswomen. She began selling real estate in 1978, and a mere seven years later, she opened her own firm, Louise Condon Realty. Twenty-four years later, her shop has grown from four to 24 brokers, while consistently rating number 1 or 2 in sales. During this time, Louise has also given back to her profession by serving as President and Director of the Greater Boston Association of Residential Realtors.

For 10 years, Louise served on the Town of Needham’s Economic Development Committee, and most recently she has been an Advisor to the Beth Israel Deaconess Hospital.

A long-serving member of the Rotary and Needham Women’s Republican Clubs, she has, for what seems like forever, volunteered at the Charles River Center, Needham Business Association (where she was a Past President and current Director), and Needham Community Council (again, as a Past President and current Director). Louise remains strongly committed to all Town beautification projects and the Holiday Blue Tree lighting ceremony. Every year, Needham celebrates various causes and events, and while the charity or honored guest will differ, one of the key contributors will not. Whether it’s a Harvest Fair, gala fundraiser, Sunita Williams celebration, or retirement event for a Town employee, the one constant is Louise Condon and her willingness to help.

Louise will tell you it’s nothing – that she merely gives back as many others do – and that if she didn’t keep moving, they’d be throwing dirt on her. But Louise’s real secret is simple and direct – she is happy to help because, as she says – “it’s fun.”

Recognized widely for her many contributions to the common good, she has been the recipient of the Exchange Club’s Book of Golden Deeds, the School’s Superintendent’s Award, the Stephanie Kalin Award, and tonight, the Richard Patton Melick Award. In towns like ours, there are people and names that you will never forget, and tonight we recognize one of the best – Louise Condon.