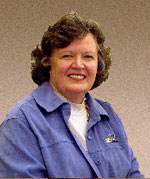 The essential mission of the Richard P. Melick Foundation is to actively promote and encourage civic responsibility and community involvement. To that end, we recognize those in our community who selflessly give of themselves for the public good, beyond the usual or ordinary contribution, and in so doing make our Town a better place in which to live.  This year, the Melick Foundation is pleased to honor another individual who for many years has done just that – Kathy Whitney.Kathy’s roots and commitment to Needham run deep as she was born and raised here on Intervale Road, the daughter of Alphonse and Margaret. A graduate of Needham High School, Kathy received a B.S. degree in Education from Westfield State College. After marrying Bill and having a son, Dennis, the Whitney’s followed the call of the Navy by living in 8 different ports in 13 years. Kathy returned to our hometown in 1981, where she has lived, worked, and volunteered ever since.

Kathy began her volunteer work in Needham with the same Parish in which she grew up and was married – St. Bartholomew’s. Kathy served as President of the Women’s Guild and was a member of the Steering Committee that ultimately formed St. Bartholomew’s first Parish Pastoral Council. Once formed, Kathy served on the PPC Board of Directors for two terms. In addition to governance, Kathy has been a Eucharistic Minister for over 25 years, and a member of the church choir for over 15 years. Kathy also worked on the Needham Houses of Worship Quilt, celebrating our Town’s many diverse and important religious institutions.

Educationally, Kathy was a member of the Parent Teacher Councils of both the St. Joseph’s Elementary School and Xaverian Brothers High School, where she also served one term as President. Kathy was also a member of the Needham Education Foundation Board of Directors, serving alongside Ralph Leader.

Kathy well understands the importance of consistent participation in our democratic form of government – and she practices these beliefs by her longstanding involvement in the Women’s Republican Club and Republican Town Committee. Kathy currently serves as Treasurer of the Town Committee after serving many years as Secretary.

Kathy has also served two terms on the Needham Historical Society’s Board of Governors, and she has been a member of the Needham Business Association Board of Directors since 1993. Kathy never stops working at the NBA’s annual Street Fairs and Harvest Fairs, where she is a mainstay at running the silent auctions. Kathy highly values the small town fun, excitement, and spirit of our Independence Day celebrations, and she shows it by having assisted on numerous July 4th Parade floats for the Historical Society, Town Committee, and NBA.

In addition to all of this volunteer and charitable work, Kathy still finds time to serve as a Town Meeting member, which she has done faithfully since 1996. Perhaps the best testament to her longstanding public service is the simple fact that at every charitable event – she is always there, always with a warm smile, always with a helping hand, always trying to contribute. Her longtime friend and mentor, Gil Cox, put it best when he said that in any Town there are only 2 or 3 people like Kathy Whitney.

In 1993, Kathy Whitney was named the Needham Business Association “Member of the Year.” In 2001, the Needham Times named her a “Local Hero.” And here in 2007, we are pleased to recognize Kathy Whitney as a much-deserved recipient of the Richard P. Melick Award. Congratulations Kathy!