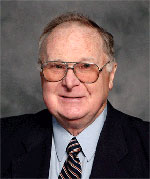 Time is one of our most precious assets. How you choose to spend your time frequently defines you as a person. Tonight’s recipient of the Melick Award has spent much of his time for others.

John Naughton is modest, quiet and unassuming. He is also very active and involved in community affairs. He is always willing to help, to fill in and to participate.

John was in the Navy in 1948 and 1949, and was recalled during the Korean conflict from 1950 to 1953. Subsequently, his career was spent with New England Telephone, Bell Labs and NYNEX.

Thirty-three years ago John and his wife Ann moved to Needham where they raised their eleven children. At that time he began to volunteer with a number of organizations, doing jobs which are unsung but vital to the success of  so many community activities.

John was a town meeting member for twelve years, from 1988 to 2000 and a member of the Park and Recreation Commission from 1988 to 1990. He was a Cub Scout Master and an assistant hockey coach for five years; a walking; marshal for the twenty mile Walk for Hunger for ten years, as well as a volunteer for the Boston Marathon and the Falmouth Road Race — each for ten years.

For thirty years John has taught religion to young people at his church, one night a week. During much of that period he was also a youth leader for the CYO and a chaperon on many youth trips.

From the mid 1980s to the mid 1990s John was a member of the Needham Soccer Club Tournament Committee for the Memorial Day Soccer Weekend, where he did many of the routine but necessary chores that made those weekends a success.

During his years in Needham John has spent thousands of hours doing various tasks at St. Joseph Parish — from answering the telephone, to driving elderly people in need of assistance or whatever was needed.

For 25 years John has been a member and treasurer of the Needham St. Vincent DePaul Society. Through that group he helps Needham families in need of short-term assistance, regardless of religious affiliation. He works not only with individuals but also with town agencies and organizations when it is necessary for several groups to respond to a financial need.

As one of our Board members said when we were discussing this award, “When I was younger John Naughton seemed to be everywhere helping out.”

On behalf of the Committee it is a great pleasure to present the Richard Patton Melick Award to John Naughton, a wonderful example of volunteerism for the benefit of our community.