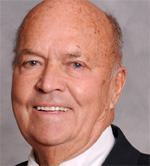 For 35 years, Dick Melick stood before many of us as he dedicated himself to our Town by serving as our Moderator. Dick stood for selfless volunteerism, civic involvement, and giving back to others – without any reward or accolades – all of which made Needham a better place in which to live. It is in recognition of this spirit and these attributes that we are most pleased tonight to present the 2011 Richard Patton Melick Award to Jack Logan, Jr.

Jack is another of our country’s incredible veterans who came to the aid of our Nation by serving in the Korean War until 1953. Eleven years later, in 1964, Jack, his wife, Mary, and their four children set their roots in Needham. By trade, Jack was a firefighter and part-time meat cutter, jobs he held for 27 years until his retirement in 1981. Of course, it was not until Jack “retired” in 1981 that his real “work” began. Over the ensuing 30 years, including up to the present date, Jack has committed himself to his fellow man and woman in an ongoing effort to make their lives a little better, and hopefully, a little more enjoyable.

Beginning with his devotion to St. Joseph’s Parish, Jack was an adult altar server at the daily 6:50 a.m. Mass for 10 straight years. He also served as a Eucharistic minister and CCD teacher. For 12 years, Jack volunteered at the original Continental Cable Needham TV Network, where he worked in many different capacities, as cameraman and director, and he also hosted his own program – “Logan’s Look at Needham.” You may recall Jack covering all the action – whether it was at Town Meeting, on the sports fields, or in the studio for the beginning of a still-running sports talk show then called “3-on-Sports.” This service led to a 10-year appointment on the Board of Directors of Continental Cable – Needham.

Jack also spent 22 years on the Needham Community Council Board of Directors. During the early years, he delivered day-old bread from Roche Bros. to the Poor Clare’s Monastery in Jamaica Plain. Years later, he used this same idea by initiating the delivery of bread to the Linden Street housing for the elderly.

But if there is one clear passion in Jack’s life – besides his wife and family – it is his love for “those who have served.” Beginning in the 1980s, Jack volunteered at the West Roxbury Veteran’s Hospital running bingo nights for the patients. He served as a Memorial Park Trustee for 12 years. He was appointed Chairman of Needham’s Korean War Memorial Committee, which established a new monument at Memorial Park. He is a member and Past Commander of the Veterans of Foreign Wars Post 2498 – he is a member, and since 1996 the current Commander, of American Legion Post 14 – and for 17 years until his retirement in 2010, he was the Veteran’s Officer for the Towns of Needham and Dover.

You may know Jack Logan, but you’ve never seen him at his finest until he presides, in full uniform, over the annual Memorial and Veteran’s Days celebrations. Jack believes deeply that we can never forget the sacrifices of our fighting men and women, and he works tirelessly to keep their memories alive by placing American flags on all veteran’s graves, and organizing parades, remembrance activities, and other memorial events all throughout Town.

As the years have collected in Jack Logan’s scrapbook, his commitment and love for his fellow neighbors has never waned. Even now, at age 81, Jack is a volunteer HAM radio operator for Needham’s Emergency Management Team, and to this day, he volunteers at Beth Israel Deaconess Needham campus three mornings a week assisting staff and patients.

A true gentleman, a real patriot, and for Needham, a selfless, dedicated, and caring human being – we are most pleased to honor Jack Logan Jr. with the 2011 Richard Patton Melick Award. Congratulations, Jack.