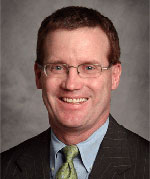 The Melick Foundation’s goal is to recognize people who have made special contributions to our community which have benefited others and have significantly affected the quality of life for all. Our recognition is generally considered to be a lifetime achievement award and it is rare that one earns a lifetime achievement award early in life. However, John Connelly is a member of our community who fits that description exactly.

John grew up in Needham and has lived here virtually al of his adult life. He and his wife, Cathy, have chosen to live here to bring up their two daughters. John has been active in youth sports, coaching hockey in Needham.

Youth Hockey and Charles River Girls Hockey leagues. He is on the Board of Directors of Needham Youth Hockey and has been a volunteer coach at youth soccer and basketball. John was an active member of the Needham Exchange Club, co-chairing their citrus sale for several years as well as the Youth of the Month program. John has been an active Town Meeting Member since 1990.

However, it is as a member and Chairman of the Needham Permanent Public Building Committee where John has selflessly served the town of Needham. He was one of the initial members when this committee was formed by Town Meeting in 1996 and he has continued to serve on the PPBC long past his original three year commitment. He volunteered to be Chairman in 1998, a position he still holds some six years later. As Chairman of the PPBC he has managed over $125 million of capital projects. Most recently he oversaw the design, construction and completion of two elementary schools totaling over $30 million. He was responsible for the completion of the Charles River Water Treatment Plant, a new roof on the high school, design work for the library, roofs at several other buildings in town and the renovation of the high school gym and auditorium just to name a few projects. John has presided over many difficult PPBC meetings, challenging outside firms to do their best for our town while managing to gain everyone’s cooperation. John reviews all project contracts, putting in countless hours outside of regular meetings and he has been the guiding force for our capital building process.

We are lucky to have someone with John’s legal experience and leadership qualities wiling to chair this important committee. The Melick Foundation is pleased to honor John Connelly with the 2004 Melick Award.