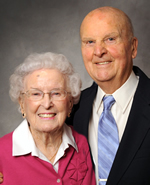 Tonight we honor Jerry and Betty Anderson. Both were born in Needham and graduated from Needham High School in the early 1940s.

Jerry went on to Wentworth Institute nights and into the merchant marine, subsequently volunteering with the Needham Civilian Patrol for three years. During his early years Jerry worked at his father’s machine shop in Needham. Following World War II he continued his work at Anderson Machine for 45 years.

Betty was a four-sport athlete in high school, captain of the women’s basketball team and recipient of the Female Athlete of the Year Award. She subsequently attended Bentley College and worked in Newton and Needham as a bookkeeper for many years.

Jerry and Betty married in 1948 and raised four children, all of whom attended Needham High School. Betty served as a Cub Scout leader and a Girl Scout assistant leader for many years along with running a 4-H group for 17 years. In 4-H, she was particularly proud of teaching young women to develop their skills and self-confidence in making oral presentations.

Jerry was a Town Meeting member for 18 years – from 1963 to 1981 with a 100% attendance record. He was active in the Village Club for 50 years, a member of the Knights of Columbus and is presently a member of the Needham Retired Men’s Club. For a number of years starting in World War II, he was a regular blood donor.

Both were active in their church, serving as volunteers in numerous capacities over the years, including as chairpersons. They prepared meals for Rosie’s Place in Boston and recently retired from the Needham Traveling Meals program where Betty, for 27 years and Jerry for 23 years, packed and sometimes delivered meals to local residents. They have been open, friendly, upbeat, caring and community-minded Needhamites for over 80 years.