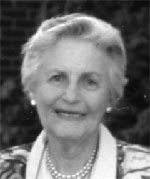 Jeanne Ferellec was not a Needham native. She chose the Town, but only after she had researched communities from Lexington to Scituate. In 1967 she and her husband selected the house that became home for them and their two younger children, Bill and Don. Their daughter Maria was married, with two children, living in New Jersey. Their son, Michael was with the army in Viet Nam.

While her children were in school, she followed what she described as the customary path – cub scouts, scouts, class mother and other related school activities. At a time that she felt was appropriate, she decided to go back to work, and started as a temporary employee at GTE. Her talent was recognized and she moved through the ranks to become Benefits Supervisor.

After retiring from business in 1987, spurred by a desire to again be more active in the community and to help others, she volunteered to drive people to the Senior Center. After that, she provided transportation to many of those for their medical appointments. When the Senior Center needed someone to enter data in a new computer program, she volunteered, learned how to use the computer, and became a data entry person. An assistant treasurer was needed for the Friends of the Elderly; Already a board member and fundraiser, she was available.

Willingness and interest in serving brought her to another organization, the Community Council. Again, she was ready to offer transportation to those in need.

When it became apparent that people in nursing homes had unfulfilled needs, such as having an opportunity to buy certain personal items, she accepted the chairmanship of the nursing home committee. One day each month, she and other committee members would visit each of the three nursing homes and create a shopping opportunity. The response indicated how much patients appreciated the effort. (Because the Nursing Home Committee carried their goods in bags in order to set up a counter, they were affectionately and laughingly called “bag ladies.”)

Few people know anyone who has prepared 367 gift bags for people who might otherwise be overlooked at Hanukkah or Christmas. Meet Jeanne Ferellec. Starting immediately after Thanksgiving, many times working alone, she accomplished that Herculean task.

Friends describe Jeanne as an amazing person. Their descriptors fold one into the other. A series of quotes: “A problem or challenge never flusters her… She just knows how to get things done… She’s one of those people functioning behind the scenes… When she finishes one task, you find her asking, ‘What more can I do?'”

People like Jeanne who suddenly and unexpectedly find themselves identified for their community service are always reluctant to receive recognition. Their words are usually “other people deserve this far more than I.” Or, “what I do is what so many others do.”

That perception is to be admired along with the role she has played in the community. She of course is right but she is also wrong. True, our community is made richer by the many who volunteer to do things that might never be done. But it was from her volunteer associates, from her peers, that her nomination came. That message speaks for itself. There is also the distinct joy of honoring a special person, and enjoying vicariously the extension of the message being sent: We live beyond ourselves!

Jeanne chose Needham and as she continues to say, “It’s a wonderful place to live!” Our voices in response would say, “Made so by people like you Jeanne.”