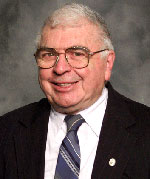 Our next honoree is our own Henry Hicks Jr., who is perhaps better known as Col. McIntosh, a Needham Revolutionary War Hero, who Henry has portrayed many times over the years to the delight of Needham town’s people.

Henry first came to Needham in 1955 after graduating from Bridgewater State College with a BS in Education in 1951; fol­lowed by his Masters in Education from Harvard in 1955. He continued to teach History and Social Studies in our schools from 1955 until he retired in 1989. During his interim years, Henry received several Distinguished Service Awards for his many activities.

After retiring Henry became involved with the Needham Historical Society where for many years he has given historical town tours to elementary school students which included mock Town meetings at the Society House, grave rubbings at the cemetery, and a trip through the High Rock Woods. We credit Henry with having climbed the High Rock more than any other person in town.

Henry and his wife Amy both still remain actively involved in many areas – Amy as a champion in senior swimming and Henry as a circus historian buff as well as continuing his interest in several Historical Associations.

It is an honor for us to recognize and thank Henry for his many years of teaching our young people about the past history of Needham and the United States.