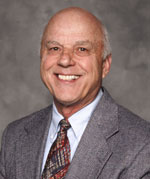 From soccer coach to traveling meals – that is the volunteer route traveled by George Macrina during his thirty five plus years living in Needham. George and his wife, Mary Lou, moved to Needham in 1969 to raise their five children. George, a Villanova graduate and mechanical engineer by profession, began by coaching his daughter’s soccer team the first year girl’s soccer was offered in town.    He went on to coach for twelve years and served as president of the girl’s soccer league.

George joined the Needham Exchange Club more than twenty five years ago and has held every position within that club, including president, vice president, secretary, treasurer and board of director. He has played a major role in practically every club project since joining. He was a member of the committee that replaced the scoreboard at Memorial Park free of charge to the town. He was instrumental in restoration of the Claxton Field Tot Lot playground. George has been a key member of the 4th of July festivities practically every year for the last twenty five years. George was responsible for putting together the group that made sure elderly citizens’ homes had large house numbers on the outside in case of emergencies. He headed the Needham telephone book committee twice, the first time being in 1991 which was the first year that our local telephone book had yellow pages. George has also volunteered on several Charles River ARC projects through the Exchange Club. Several years back George was part of a group that visited the local Veterans Hospital several times a year, serving refreshments and playing bingo with the veterans. Additionally George has organized, supervised and participated in projects such as painting park picnic tables and benches and clearing walking trails in the town forest. He is in his second year of serving on the Board of Directors of the Child Abuse Prevention Center.

For the last ten years George has been helping elderly citizens prepare their income tax returns. He does this through the AARP and is required to take classes each year and pass a test in order to provide this service. George is now responsible for coordinating the volunteers for this area. In addition to helping elderly citizens he has also helped residents of the housing authority and deaf citizens with their tax returns.

George and Mary Lou are in their third year of delivering traveling meals through the Needham Board of Health. They do this one day a week from September through May and also help out with fund raising for this program.

Clearly George fits the profile of a quiet, unassuming volunteer who contributes to the community and to his neighbors, friends and family. The Foundation is honored to award the 2006 Melick award to George Macrina.