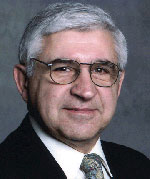 We are proud to present the Melick award to George Kent. George embodies the phrase “quiet community service.” He has quietly and modestly served our community for many years without any need for public accolades or public recognition.

He is a registered professional engineer and has worked for approximately 25 years in industry doing engineering design and construction work. He now teaches engineering in Northeastern University’s cooperative education program.

George is a true community service volunteer. He began volunteering when his sons were young and continues to volunteer now that his sons have families of their own. George is a big baseball fan. In his earlier years he coached children’s baseball in the inner city. He started coaching in the Needham Little League when his children were young. Eventually he moved to the “majors” and his coaching in the Needham Little League has continued for some thirty years now. He is well known as the longtime coach of the Needham Cardinals. George works at baseball signups and baseball tryouts and at whatever other functions are necessary to keep the Little League successful.

Through the years George somehow avoided local town politics. However, in the early 1990s he was asked to be part of a town meeting study committee to review how the town approaches building projects. He agreed to participate on the committee and soon was critically reviewing what problems had arisen in previous town projects. With George’s engineering experience in project management, he was a driving force in the creation of the Permanent Public Building Committee, known as the PPBC. He was instrumental in the development of the town bylaw outlining this committee and in bringing the proposal to Town meeting.

Active participation on the study committee earned George a longtime seat on the PPBC itself. He was asked to help steer the PPBC in its’ early formative years. He somewhat reluctantly agreed to fill one of the engineering slots on the PPBC. Luckily for the town, George has continued to serve on the PPBC long past his original two or three year commitment. For the past five years, George has been one of the most dedicated volunteers in town and has been a key player on all major building projects. Not only does he contribute at each PPBC meeting but he also works countless hours outside of the meetings on the town’s behalf. George is considered the “go to” person on the committee for design meetings, job site meetings, contractor disputes, as well as construction change orders and cost issues. He is viewed as the PPBC project facilitator and troubleshooter on every project, whether it involves portable classrooms or a multi-million dollar water treatment plant. He always makes himself available whether it is at 7 am or 8 pm for contractor meetings, attorney meetings, job inspections or design meetings. He was a key person in completing the Newman projects on time and within budget. He was instrumental in the water treatment plant project and the West Street pumping station construction. He has been active and influential on every PPBC project. His insistence on realistic schedules, well-defined job scopes and adherence to budgets has profoundly changed the way Needham approaches building projects. George has saved the town more money in the past five years than most residents will ever realize.

George has been described as the consummate volunteer. He volunteers in an unassuming manner, not looking for any particular recognition or award. He does it because he believes that it is the right thing to do and because he genuinely enjoys. We would like to publicly thank him for his dedicated service to the town. We are proud to present the Melick award for community to George Kent.