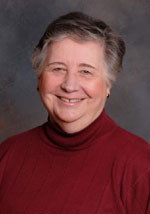 The Richard Melick Award is presented annually to a person who has unselfishly helped friends, neighbors, and strangers and contributed as a volunteer to our community. With that in mind the Melick Foundation is pleased to honor Colleen Schaller. Her contributions to the Town of Needham over the years have been incomparable. She has, and still does, contribute an unsurpassed intellect and intelligence to the needs of the Needham Community and it’s many demands. Colleen came to Needham with her husband Frank in 1963. She has 2 children.

Her efforts, first as a board member on the Center for the Prevention of Child Abuse, followed by serving as its president twice, was instrumental in shaping the organization’s activities in the area and moving its home from Newton into Needham where it was conceived. It is now part of the Needham Community Council where she is a current participating member. Colleen also serves on the board of the Council on Aging.

Further, Colleen is current president of Needham Cares, a local group set up to help the people in the South disadvantaged by Hurricane Katrina, and has not only administered the local work but actively participated in the construction activities on-site. It appears that her intentions are to be involved. Not involved in easy work, but where it counts.

She is a member of the Needham Exchange Club, where in addition to chairing other club committees, she has chaired several annual Sunshine Special Outings in the fall for senior citizens; she has been Chairman of the Independence Day celebration, and of course participates with other members on the cumbersome task of putting that entire celebration together.

Colleen served as the Exchange Club President in 1999, and received its coveted Exchangite of the Year Award in 2003, for work done for the club and as service to the Needham community.

She belongs to a book group and a gourmet group; and just as an aside, she is an employee, a wife, a daughter, a mother, a grandmother, a friend and manages all the incidentals that go along with them.

Colleen Schaller has contributed greatly to the Town of Needham during her 40 plus years of living here. We truly are a better community because of her efforts. Colleen is a worthy recipient of the Melick Award. Congratulations Colleen!