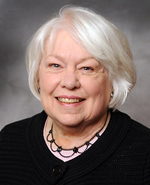 Carol de Lemos and her husband, Ed, have lived in Needham for over 45 years. As a stay-at-home mom, Carol lost no time in volunteering in the community.

For 19 years Carol was a member of what is now known as the Needham Women’s Club, participating in projects such as testing all kindergarten children for lazy eye and hearing problems, helping special needs children on a one-on-one basis, and serving on the Executive Boards at both the town and state level. She was especially welcoming to new club members, making them feel at home right away. Typical of Carol’s personality, she never wanted to serve as president, preferring to work in the background. During her years in the Women’s Club she was awarded the Marilyn Perry Award for Leadership in the Community.

Many in Needham know Carol through her role as Executive Director of the Needham Business Association where she coordinated projects such as the Sidewalk Sale Days, Harvest Fair, Soup Contest, Blue Tree Lighting, fund raising, and the monthly newsletter for over 20 years. It takes a very special person to serve in that role, and Carol excelled in what she did. It was not just a job to her. She truly cared for the well-being of not only the town of Needham, but each individual business owner.

With funding from the Needham Business Association, Carol founded and chaired the Town Common Beautification Committee, putting benches and brick sidewalks on the Common, and supervising the addition of flower plantings and a sprinkler system.

In 1999 she was a founding member of the Needham Community Revitalization Trust Fund committee, which, using no town funds, has enhanced several areas of the town, such as restoring the historical painted sign on the brick wall of the passageway between the Chapel Street parking lot and Great Plain Avenue, erecting banners throughout the town, and placing sculptures on the Common.

Carol has served as Vice Chair for five of the nine years she has been on the Board of Directors of the Council on Aging. As a member of the Senior Center Exploratory Committee she spent countless hours working to find the right place for the new Senior Center. She interviewed architects and visited over 30 senior centers to observe and learn what would be right for Needham. She attended meetings of the PPBC, Finance Committee, Planning Board, and Board of Selectmen, facing what at times seemed to be insurmountable problems, but ultimately achieving success. Her commitment to the passage of funding for the Senior Center by the November, 2011 Special Town Meeting was the focus of at least five years of effort on her part.

Carol is a past Town Meeting member, and a former member of the St. Joseph’s Church choir. She is a fabulous cook and has been in a gourmet group for over 30 years. She supported the Channel 2 Auction and was a bid runner for over five years. She and Ed have four daughters and 10 grandchildren.

Carol is known for always being there when needed. Over the years she helped with the reception for Charlie Wyckoff, the toast for Phil Garrity, the Hard Hat Ball for the Greene’s Field Playground, the collation after the Carleton funeral, and many other events. She helps decorate the Historical Society every Christmas and has been on several of their committees.

Carol quietly helps without saying anything about it. If you ever have a worthwhile project and need help, just look beside you. Carol will be there, with a big smile.

One of truest and nicest things we know about Carol is she always has something nice to say about everyone. She exemplifies all that the Melick Award represents.

We are proud to present the 2012 Melick Award to Carol in recognition of, and with thanks for, her extraordinary commitment to the Town of Needham.