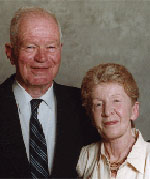 I have the distinct honor this evening to present the Richard Patton Melick award to Anne and Tom Whearty, who are outstanding examples of volunteerism for the common good of this community.

Anne and Tom moved to Needham in 1966, where they raised their four children. They both are now retired. However, in 1979, prior to retirement, Anne started to volunteer at the Deaconess Glover Hospital in the mail room, one day a week. She was attracted to the hospital as her daughters had already participated in a program as junior volunteers. Little did Anne know that that initial act of generosity would lead to a major family commitment.

Anne’s time at the hospital increased over the years, as she was not reluctant to raise her hand when more needed to be done. In 1990, she volunteered to fill the position of Director of Volunteers. It was a full-time commitment for Anne, in what was previously a paid staff position.

By 1993, she enticed her husband, Tom, into spending a day a week in the hospital mail room. Tom’s involvement similarly grew to include additional time at the diabetes clinic, keeping track of volunteer hours and serving on several hospital committees and special projects. Tom also became available with Anne on a full-time basis. Whatever had to be done, whenever it had to be done, Anne or Tom responded and covered it.

As Director, Anne is responsible for soliciting, orienting, training, supervising and caring for 150 volunteers including a dozen or more junior volunteers. As a people-oriented person, she makes every effort to match a volunteer to an assignment whether it be transportation, working in various clinics, or assisting the nursing staff with patient needs. When a volunteer is suddenly unavailable, Anne or Tom step in.

In order to better serve the Deaconess Glover community, Anne, on her own, took several courses that she felt would improve her job-related skills She believes these courses have benefited her and the people that she serves. If all this was not enough, she has also served as a Vice President of the Hospital Aid Society.

Anne believes that she has received as much as she has given. She likes people, enjoys identifying their interests and obtains fulfillment from helping people who are ill.

As one staff person at the hospital stated, Anne and Tom are dependable and conscientious; they seem to be here all the time; they visit patients and listen to their needs; they support the work of all hospital departments; they are available seven days a week. “They are truly a model of what volunteering is all about.”

Anne and Tom, congratulations, and thank you for all you have done over the past twenty years.