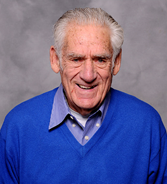 With his father’s passing, Ron Sockol, a native of Vermont’s Northern Kingdom, moved to Brookline, MA at the age of nine. In 1967 he came to Needham with his young family.

As the father of four young boys he became involved in youth sports even before his sons were old enough to play. He coached Little League baseball, Pop Warner football, and YMCA basketball and stayed with the programs mentoring young men even after his own sons had finished playing.

A football event which Ron chaired brought national attention to our Town, the Needham/Wellesley Centennial Game held at Memorial Park.  As a veteran, Memorial Park has been a focus of Ron’s. He spearheaded the Community Weekend when volunteers added the second floor to the Memorial Park building.  He also led the planting of the Park’s garden and the 9/11 Memorial honoring Needham residents.  He served as a Memorial Park Trustee for over 25 years.

Ron served as a director of Needham Community Council for over 20 years. Highlighting his tenure were his efforts to establish a food pantry and leading the volunteer effort in building an addition to the Lincoln Street building. The NCC has recognized him with the Stephanie Kalin Award.

Ron’s dedication to the community is boundless. He has served as a director of the Needham Educational Foundation, chairing its Spelling Bee. He has been an active member of Needham Rotary serving as president in 1989-90. He has flipped more pancakes than one can imagine.

Ron has also shared his building expertise with the Town. In addition to the Memorial Park building and the NCC addition he has overseen the construction of a garage at the Tippett House. His building expertise was tapped again when he ably contributed to the Town Meeting study committee which established the PPBC.  As for Town Meeting, Ron has had perfect attendance for almost 30 years. By his side for all these achievements has been his wife of 62 years, Lois.

It is with great pleasure and appreciation that we present the Richard P. Melick Award to Ron Sockol.