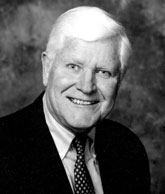 It is with sadness that we announce the passing of Dick Melick on August 22, 2014 at the age of 87 in Naples, FL. He was an extraordinary man who did so much for the town of Needham. The foundation is hosted a reception in his honor on October 27, 2014.

For Dick’s family, Washington, D.C., was the South – reflecting the tradition of courtesy and involvement in community affairs. Civility was more than a word. It was a practice.

But Washington, D.C., was something else: The heart of the people’s federal government. For a boy born there in 1927, the spirit of citizen participation lay around him, unrecognized. But it was going to shape a developing life.

It was in that Washington, D.C. environment that Dick, as a fourth grader, was introduced to his first challenge. He was drafted to be a volunteer flag bearer for the school’s girls’ drill team. While the sound of his small feet was muffled by the hundreds of others, he was marching on the avenues where the echo of history could still be heard and where more would be made. Constitution Avenue and Pennsylvania Avenue: the Nation’s capital.

There’s always something contagious about being involved, particularly if others recognize leadership traits in you. As a six grader Dick was elected captain of the school’s safety patrol. Three years later he was elected President of the Student Council. By this time his family had moved to Newton, Massachusetts, and he was in junior high school. During his high school years, Dick became President of the High School Legislature. While primarily a student, and athlete, he also served as Vice-President of the Varsity Club.

High school was experienced during the years of World War II. Unusual tensions were felt by all citizens and there were restrictions on what people could do. Along with others who recognized a community-wide need, Dick was instrumental in creating and developing a student canteen.

Perhaps not unexpectedly, Dick joined the service and became part of the Naval Medical Corps.

In 1947, he returned to civilian life, and entered college. Haverford College, the University of N.H.; and graduate studies in Law at Boston University.

During those college years, his family summered in Wells, Maine. It was there that Dick had another introduction to democracy working at the local level. Town Meeting – where every citizen had the opportunity to participate in Town Government. So impressed was he with the idea and form of government, Dick registered to vote. In spite of being in college when Town Meeting was scheduled, he would hitchhike from Philadelphia to Wells, Maine, to attend Town Meeting.

Dick’s legal career was a classic study in advancement. In his first year after passing the bar he became a legal assistant to the Massachusetts Attorney General. A year later he was one of ten lawyers in a defense trial firm that subsequently expanded to full service. Twenty-seven years later, 72 lawyers in the firm, Dick was the second senior attorney and chairman of the Executive Committee.

Significantly, one of those who was once a junior attorney, commented, “No matter how busy he was, Dick always had time to see you.”

As one might have expected, his professional career expanded. Outside of his practice he was a lecturer and professor at prestigious colleges, Mediator for Trial Courts in the First Division; Arbitrator in the American Arbitration Association, and member of the Board of Bar Overseers. His resume assumed impressive proportions.

In 1959, Dick adopted Needham as his home town. He balanced community service – with professional service. Highlights of his service include: Taxpayers’ Association, Little League Baseball manager for 5 years, Needham Y.M.C.A. trustee, Charter member, Past Exalted Leader B.P.O.E and Board of Appeals member. Numerous appointments and honorary awards expand the record.

In 1962 Dick was elected Moderator of Needham Town Meeting, the Legislative branch of Town government. In 1997, after a remarkable 35 years, he notified the Town that he was going to retire.

When he made the announcement at a special Town Meeting, it was greeted with stunned silence. Then the Town Meeting body rose as one to express its appreciation and admiration. The applause lasted for over ten minutes. It had been a distinguished term – unique for the outstanding quality of service, and for its longevity.

Never too busy to help a friend without being asked, or to volunteer to work on a community project. He was there, many time unexpectedly, when someone needed help.

His words, when responding to the testimony afforded him were simple but eloquent: “I simply wanted to contribute. I’ve enjoyed it. I feel that I have received more than I gave. Thank You!”

The Melick Foundation was created to recognize Dick Melick’s example.

The Foundation does this by recognizing residents who have unselfishly given to the community by presenting them with the Richard Patton Melick Award. In addition the Foundation works with Needham High School to educate the students about town government and town meeting.